For those who don’t already know Dave Rubin’s background, Rubin’s show “The Rubin Report” was originally apart of TYT (The Young Turks) lineup until splitting ways to grift towards a more “Conservative” audience, an audience is all he would get, because the man no matter what he says is not a conservative at all. If the state of the conservative movement is where we promote anal sex between two men and them being able to have children (through other women) then I want no part of the movement.
Dave Rubin announced on Twitter yesterday that he is having two children.

It’s true. All of it. pic.twitter.com/IV4rUIn13j

For those who don’t think that posts like this and people like this are obvious plants in the right wing movement to try and normalize satanic, un-natural, and antichrist material you are a moron. Why else would he post this than to get people to come to his side and post congratulations, thus normalizing this sick behaviour.

And of course his plan worked! All the usual suspects, and some others went to the comments to congratulate Rubin and his degenerate partner on his new children.

Yeah wow is right, wow that you host this grifter’s show. @BlazeTV

Of course PragerU which promotes Zionist trash and constantly shills for Israel condones this. (You see the correlation between Christ, all these fake/non christians/judeo christians will condone garbage like this) 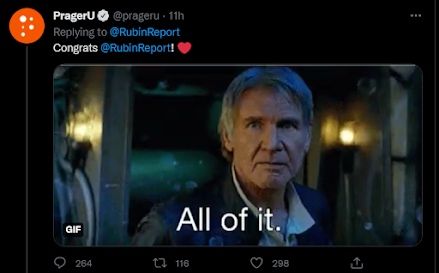 You can go through the twitter thread yourself and see all the other people who gave their applause to degeneracy, honestly I was glad to see the backlash against Libsoftiktok for congratulating him, hopefully people will realize what these people are which are fake, fradulent grifters trying to latch onto a movement that they ultimately have zero place in.